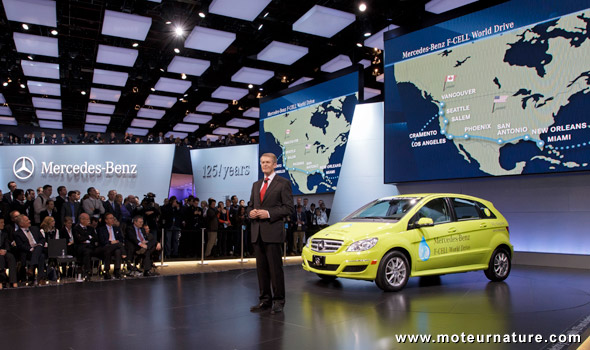 Driving all around the world is a dream for many of us, which turns real for only a lucky few. For a team of Mercedes drivers, that dream will be even better, and greener, as they will do it without any CO2 emissions. How can that be? With hydrogen, of course!

As another demonstration of the viability of the hydrogen automobile, Mercedes has announced at the Detroit motor show that it will organize what it calls the F-Cell World Drive, where 3 zero emission cars will drive through Europe, America, Australia, China, Asia and back to Europe.

The cars will leave Stuttgart later this month, and they’re expected to come back in early June, or 125 days later, precisely to celebrate the 125 years of Mercedes-Benz. Linde will provide hydrogen along the way, with all routes very carefully planned, as the range of the car is a modest 250-miles. An hydrogen truck will be required to cross the Kazakhstan’s desert, but hydrogen’s available everywhere else (according to Linde), with the big advantage (over a car running on battery power) that filling up takes only a few minutes.