We talk often about the new trend in engine design, I mean downsizing, or the replacement of a low-tech large displacement engine by a high tech small displacement one. Ford might be one of the most ardent supporter of this trend, you’ll see it in their Ecoboost engines, which are direct-injected and turbocharged, and where an inline-four cylinder replaces a six, and a six replaces a V8.

Downsizing gives cars better fuel economy, and nobody’s against that. What might be a trouble is that downsizing puts four-cylinders engines under most hoods. To car enthusiasts everywhere, four-cylinders cars have rarely been exciting. We want more, and we may get less as several manufacturers, BMW included, are working on 3-cylinders cars! 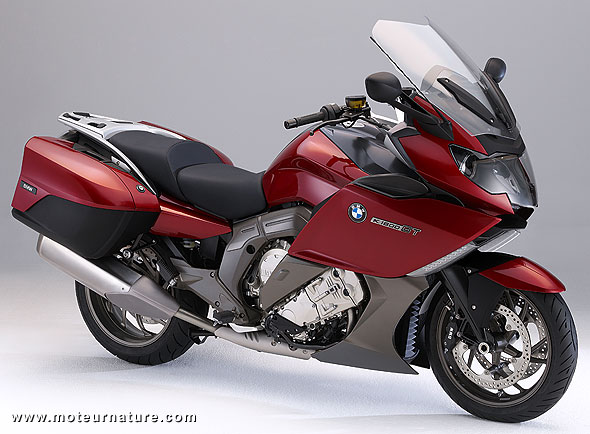 With that in mind, it was a great relief to see BMW launching a 6-cylinder on a motorbike. With a 1.6-liter displacement, it’s a strong engine, giving 160-hp and 130-lbs/ft of torque, but a bike engine, with different characteristics than a car one. Still, it’s very much unexpected, as BMW could have done a four-cylinder, but they chose to do a six.

Engineers worked hard to make this engine nearly as compact, as light and as fuel efficient as a four, BMW says they succeeded, and I believe it. The engine, complete its transmission, weighs just 102.6 kg (225 pounds). That’s excellent, and it gives me hope for the future as a green enthusiast, and as a car enthusiast as well.

Because this K1600 motorbike is showing us that it’s possible to make a gasoline engine efficient while retaining specs an enthusiast could love. With a nice soundtrack too, because more cylinders have always meant a better sound!

I hope all the other car manufacturers are watching, and that they will learn from this new engine, designing more and more small sixes and eights instead of the ubiquitous four…