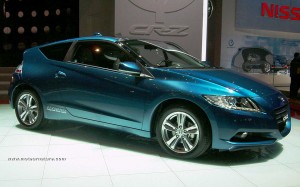 Do you like sports car? The Honda CR-Z looks like one, but isn’t one. Not enough performance, as Honda concedes that the 0 to 62 mph acceleration will barely be below the 10-second mark. A big SUV like Honda’s own Pilot is faster. The CR-Z could then be an eco-warrior, a fuel economy champion, but it fails there too, with a Prius being 20% more fuel efficient. So what’s left? Compromise.

Could there be something between a sports car and a an green car? A car that would mix the virtues of both? This is what the CR-Z would like to be. It’s a difficult challenge but I think Honda is up to it. The most difficult actually, will be to find a market for such a car. Automotive News reports that there was many doubts inside Honda itself. The hybrid idea is now associated with the Prius, and an hybrid sports car could confuse buyers. On the other hand, it would divert people from linking hybrids with Toyota, since the manufacturer of the Prius doesn’t have anything close to the CR-Z. 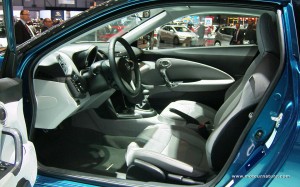 And what about the Lexus RX450h? This one is far from being an eco-champion, but that doesn’t prevent it from being the most successful of all Lexus hybrids. The Prius will keep on being the king of hybrids for many more years, but we shall stop to think of hybrids as pure eco-cars. Most cars are bound to become hybrids one day. Even Toyota has said that there will be an hybrid version of all its models sometimes. The CR-Z is a precursor. I see many people doubting, would they if the CR-Z was carrying a Toyota badge?

I like the CR-Z. I’ve been seating in it at the Geneva motorshow, it’s a very stylish 2-seater that I would be happy to drive everyday. It may not look as sexy as a Mazda Miata, but it has much more space inside. Honsa says it’s a exhilarating drive, I can’t wait to find out by myself. I may wish more horsepower, but Honda has already said that more is coming… Still hybrid of course. A true hybrid sports car, then? Hmmm… There’s got to be a market for it.