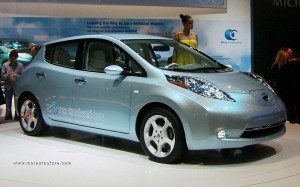 The Nissan Leaf will be available late this year. That’s in Japan, California and a few other carefully selected states. But it will come nationwide in 2011, and in Europe at the same time. The Leaf was intorduced in Japan, on the 2nd of august last year, and americans have seen it at the Los Angeles and Detroit motorshows a few months later. Europeans were not so lucky since Nissan wasn’t at the Francfort motorshow last september. Now that the Leaf was one of the highlights of the Nissan’s booth at the Geneva show, the whole world has seen the car.

The whole world may not like it. If you think the Leaf doesn’t look great in pictures, it doesn’t look any better when you’re in front of it. But since we’ve been waiting for an affordable mass-produced electric cars for years, we shall not complain. An electric car coming from a trusted manufacturer, built in high volume to get an affordable price, that was a dream not long ago, and it’s about to come true with with this Nissan. No other car can touch it. 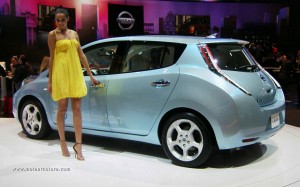 There’s other electric cars on the market. The Tesla roadster is one, but it’s a very expensive 2-seater built in very limited production. It’s clearly not in the same league. The Mitsubishi I-MiEV could compete with the Nissan, but it’s substantially smaller, and less performing. The Leaf is way better. Also, Mitsubishi is actually constrained, its battery capacity is limited at 9000 batteries per year.

Nissan has the facility in Japan to build 50,000 electric Leaf a year, and in 2012, with its american factory, it will be able to make 200,000 cars a year. No other manufacturer is close to this production level. Nissan is the leader, and it will take years for others to catch him.