Cars emit greenhouses gases, we have to reduce those emissions. We all know that, and so do car manufacturers. At the Geneva motorshow, they’re all hard at work. Every brand trying to convince show-goers that they are the most active, and the most effective in reducing CO2 coming out from the tailpipe. One question comes to mind, who is the best? Who is the most effective in reducing overall CO2 emissions with its new model?

We dare answer partly to this question, by naming the one single new model that will be most effective to reduce CO2. 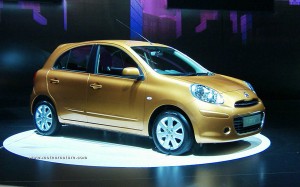 CO2 from cars must be appreciated in 2 ways. First of course, there’s the car emissions, the lower the better, this varies with the car’s technology. And then, there’s the number of cars on the road. We mean that if a Ferrari is very big CO2 emitter, which it is, Ferrari cars actually hardly matter on a global scale, since they’re rare, and that the people who owns them don’t drive them much. Some hardly drive at all, and it’s quite easy to see classifieds of Ferrari having been driven less than 1000 miles per year.

What matters is the cars many people buy, and drive everyday. This is what takes us to the new Nissan Micra. Since 1983, the Micra (March in some countries), has been a very strong seller. Sadly, it has never been offered in the United States. This shall change. Toyota’s Yaris has been selling quite well, and Ford is very confident that its new Fiesta will be a hit. Precisely what Nissan expects for its new Micra, in Asia, in Europe as well as in the US (a bit later though). 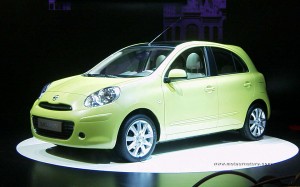 Four large factories will build it in very large numbers, and the model will be sold in 160 countries all over the world. What matters to us is that this new Micra will be a CO2 champion, thanks to its new 3 cylinder engine. This is not a new design, since it is Nissan’s 1.6 liter inline four (from the Qashqai) minus one cylinder. Bore and stroke haven’t changed, which makes this engine a 1.2 liter. With such a small displacement, power is not great, but CO2 emissions certainly are. How about 185 g/mile? But wait there’s more, in the form of a supercharged version of this engine, with direct fuel injection. Power jumps to 95 hp, while CO2 emissions go down to a record 153 g/mile on european emissions test!

To those of you who are not familiar with these numbers, this is better than an Honda Insight, and close to the record of a Prius. If hundreds of thousands of people get this new Micra with that new record-breaking engine, this will be progress. And this will be a major improvement on the road to reduce emissions. This is precisely Nissan’s plan.