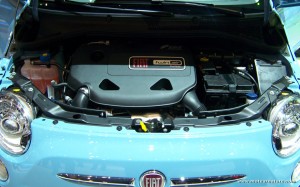 The iconic one is of course the old Citroen 2CV, but the original Fiat 500 also had a two-cylinder. We shall also remember the japanese. The first cars from Honda, Subaru or Suzuki, all had two-cylinder engines. They were not fast, but they were cheap ot buy and run. That was more than enough for many people. In today’s cars with standard air conditionning and power everything, that would not be possible, but Fiat’s Twin-Air engine is not a return to the past.

On the other hand, it’s the way to the future with loads of technology to minimise friction and improve thermo-dynamic efficiency, to get the most power from the least fuel. The engine is a 845 cc affair, not a big deal by any standard, but in its most common turbocharged form, it’s making the same power as a 1.2 liter, with much better torque. 85 hp at 5500 rpm, and 107 lbs/ft of torque at 2000 rpm. This is no V8, but in car less than one ton, it can do job more economically than any small inline four.

In a Fiat 500 (pictured), it can make the car go up to 107 mph, and it requires less than 11 seconds to accelerate from 0 to 60 mph. These are decent numbers. Fuel economy is an excellent 56 MPG on european official tests. Maybe Fiat could think about importing it to the US…