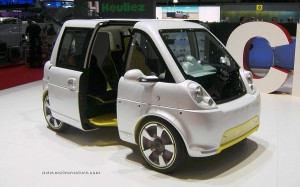 Heuliez is a car manufacturer who has never sold any car under its own name. This company is a contract manufacturer, a dying breed all over the world. Its last contract was over the Opel Tigra, a small two-seater for which Opel was not willing to invest in the setting up of a dedicated production facility. It ended last summer, and that marked the end of car production at Heuliez.

No new contract is expected anytime soon as car manufacturers are struggling with overcapacity and the economic crisis. Manufacturing has also improved, and with better organization, it is now possible to make very different low volume cars, in one single place. Karmann failed because of this, and so did Bertone, but Heuliez is trying to reinvent itself making electric cars. 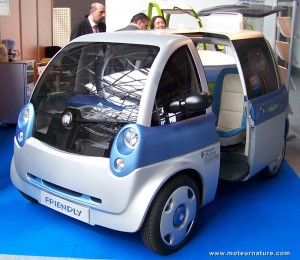 It came up with the Friendly at Paris motorshow in 2008. A pretty nice little runabout, a 3-seater with the driver in the center. It’s very compact, as small as a Smart Fortwo. With a projected low price, it clearly has some potential as a zero emission city vehicle, if only Heuliez could get the funds to complete the model’s development, and launch its production.

An indian company, Argentum Motors, was supposed to take over Heuliez in 2008, it didn’t happen. Next was Louis Petiet a corporate maverick who promised to invest 16 millions euros in the company. He managed to get the control of the company, which he still has, but nobody has seen the money he promised. A lot is expected from a new man then, a savior with deep pockets, it could be Alphan Manas, the turkish manager of a private investment company which goes by the name of Brightwell. 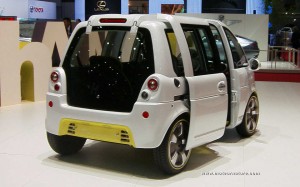 He’s currently studying the case, and we are expecting his view this week. Several hundreds of jobs are at stake, and a litlle electric car which has received a facelift and a new name.