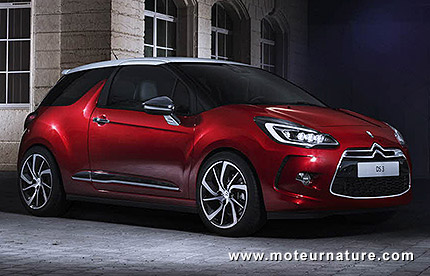 A premium small car, the Citroën DS3 is a big seller all over Europe, and a strong competitor for the Mini. The car’s getting a mild make-over with sharpened front lights, and some more significant changes under the hood. Gasoline engines range from a small 1.2-liter 3-cylinder to a 207-hp highly turbocharged 1.6-liter, but it’s the diesels which are making the news. They’re updated engines with a new exhaust after treatment system to meet the upcoming Euro 6 emissions regulation. They comes in two levels of power, 100 or 120 hp, with the names of BlueHDi 100 and BlueHDi 120.

To those not familiar with PSA Peugeot-Citroën naming patterns, all diesels from PSA carry the HDi name since 1998. BlueHDi means they’re the latest, clean generation units, meeting next year’s emissions regulation. So they’re cleaner than ever, but they’re also more fuel-efficient than ever before with record-breaking fuel economy figures. The DS3 with the BlueHDi 120 engine is already excellent with a 65 mpg combined rating, but the BlueHDi 100 is nothing less than extraordinary with a 78 mpg rating. No other car matches it. This is the best, with CO2 emissions equivalent to the Toyota Yaris hybrid, at 79 gram per km.

Few people expected that, but to those European drivers looking for the most economical transportation, they should get this Citroën DS3. Note also that with a 48-liter fuel tank, range is (theoretically) an astounding 1000 miles. No electric car will ever beat that.