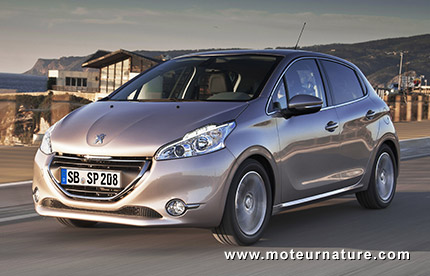 2013 sales result are in, and the biggest news is a sharp drop in diesel sales. Diesel cars had 72.85% of the French market in 2012, they went down to 67.00% last year. Gasoline cars are up, going from 24.82% to 29.72%. That sounds like a lot, but actually, it’s only a few high-selling models which made most of this change. The French car manufacturers have launched new high tech 3-cylinder engines for their best-selling models (Peugeot 208 shown), and this explains for a large part the rise in gas engines. On larger models, say a Renault Scenic or a Volkswagen Passat, share of gasoline engines remains marginal.

Everybody remembers Carlos Ghosn saying that EVs would grab 10% of the market by 2020, but in 2013, it was less than one new car out of 200 which was electric. 8,779 electrics out of a market of 1,790,456 cars. The Renault Zoé is the leading model by far, making 5,511 sales but that’s still low. Sales to businesses set aside, the consumer market remains dramatically small. The French EV market to private buyers should be at least above 10,000 units per year. It’s still possible to look at things positively, because the EV market has grown fast, from the 5,663 cars of last year, but it’s a troublesome fact that with lower volumes, EVs sales (+55%) haven’t grown as fast as hybrids sales (+61%). Nobody had expected that.

One thought on “Hybrids sales rise faster than electrics in France”