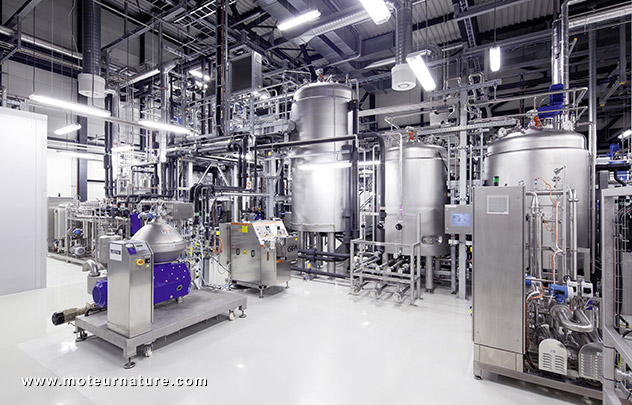 Global Bioénergies is a young French company, barely five years old, but it has mastered a pretty unique know-how in transforming glucose into isobutene, and then to isooctane. It doesn’t sound like much, but isooctane isn’t something different like ethanol, it’s a component of today’s gasoline. So there’s no need to modify engines in any way to make them compliant. The only difference between the isooctane from the oil companies and the one from Global Bioénergies is in its origin. Gasoline contains mineral isooctane while the one from Global Bioénergies comes from renewable sources, and some people call it bioisooctane, but chemically, it’s exactly the same stuff. An added bonus compared to ethanol is a superior energy density.

Two factories are being built to produce this highly promising new biofuel, one in France, the other in Germany. If something is missing, that would be some kind of a moral authority to back up the fuel’s credentials. Audi has taken that role. It’s not new, as the famous German car manufacturer has been confidentially following Global Bioénergies for more than two years, but the partnership is now revealed. Audi will test the biofuel coming from the German factory, and the market reacted as soon as the partnership was made public. Shares of Global Bioénergies (on the NYSE Euronext) went up 12% in only a few hours.