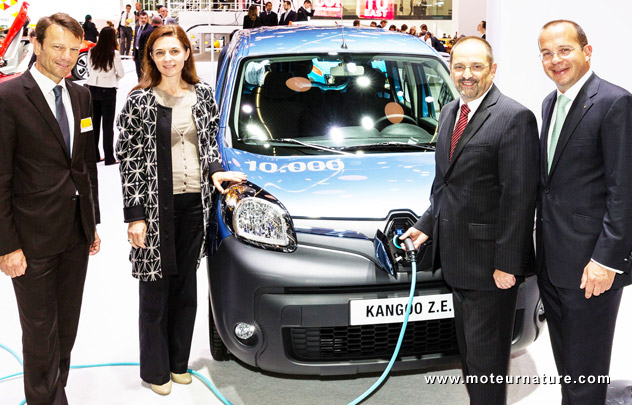 Many people still think as electric vehicles as slow sellers and they will have a point with the Renault Kangoo Zero Emission. It took more than two years to sell 10,000 models. At last, the share of the electric Kangoo is increasing, and it now makes nearly a tenth of all Kangoos sold (most buyers go for the diesel version).

The 10,000th electric Kangoo was delivered during the Frankfurt motor show, Deutsche Bahn, the German railways company, was the happy customer. Most electric Kangoos so far have been sold to very large companies, with the French postal service being the largest of them all. Many more should follow. Too many postmen are still driving diesel vehicles. Never driving long distances, and with a fixed route, postmen are the best users possible for electric vehicles.

Volumes shall remain small though, and the Zoe will easily pass this record, breaking the 10,000 sales threshold within its first year on the market.