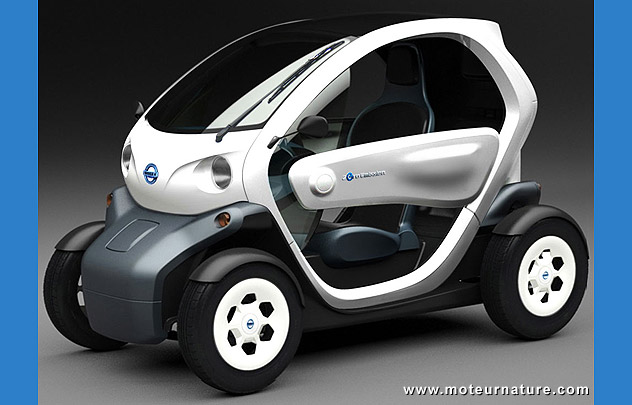 Nissan had a few Renault Twizy sent to Japan, in late 2011. These little electric vehicles were rebadged as Nissan models, with the name of New Mobility Concept. They have been seen in a few events in Japan, and many thought at the time that the Twizy would soon be launched on the Japanese market, but that didn’t happen. We assume very few people were interested by it.

The obvious reason is that when trying to be a bridge between a car and a motorcyle, the Twizy fails to convince anyone riding a scooter. Compared to Suzuki Burgman, the Twizy isn’t as well-built, it’s less powerful (even compared to the base Burgman 125), more expensive and has less range. So we understand that the electric propulsion and the four wheels are great assets, but they may not be enough. This is where re we shall remember the Land Glider concept from 2009 (below).

This Nissan concept is much larger than a Twizy, it’s about three feet longer. It’s also much more powerful, and way upmarket. According to Etienne Henry, Nissan’s head of product strategy and planning, it’s a very interesting concept. Speaking to Automotive News Europe, Henry acknowledged that Nissan is working on a better Twizy, but he declined to say if the Land Glider would be a starting point, nor the Twizy.

Our hope is that Nissan will make it more of a real car, with normal doors and windows, windows that could go down inside the dorrs (!), and performance that would at least match that of a 125 scooter. Come on, Nissan can do it!