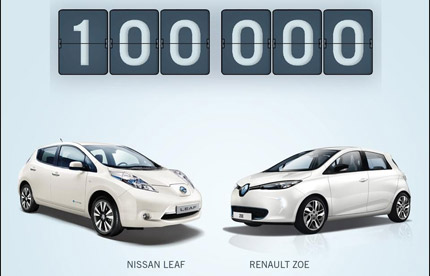 100,000 is an important number. It shows there’s a real market for electric cars in many countries. This market is dominated by the Nissan Leaf, which attracted 71,000 customers, to make it the most successful electric car ever, by far. All the competition is way behind, and it will be a surprise to learn that the second best selling EV from a Renault-Nissan group is not a car. It’s the little Twizy, which is drivable without a license in many places. It found more than 11,000 customers, a bit more than the Renault Kangoo EV, a compact van.

The Renault Zoé is the fourth best-selling EV, but this will change quickly, as it has only been available since Spring. Sales are ramping up fast all over Europe. From the Leaf’s launch in December 2010, it took 32 months for the group’s EVs to make 100,000 sales, and we bet that growth will increase by at least 33%. We mean Renault-Nissan will sell their next 100,000 cars in less than 24 months.