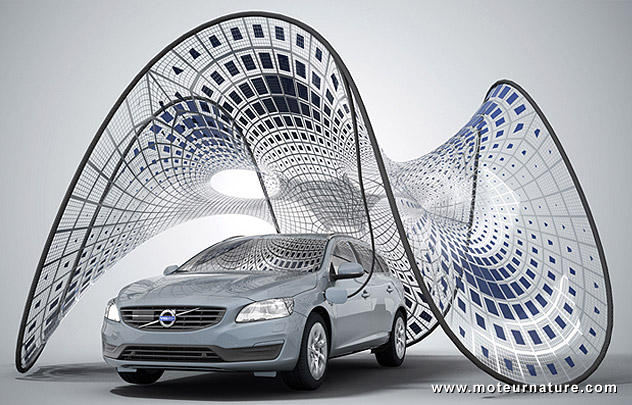 Everyone driving a plug-in car, be it an EV or a hybrid, has a dream: running on free and green solar energy. The only trouble is in the surface of solar panels a car needs to get enough energy for its movement. A car’s roof is way too small. Some cars, like the Toyota Prius, offers a solar roof as an option, but the energy it gives is barely sufficient for ventilation. That led a design and architecture agency from Los Angeles, Synthesis, to invent something original. Very original!

Obviously, it is not intended for daily use. This is a lightweight, rapidly deployable, free-standing tensioned membrane structure and portable charging station. It will be officially unveiled by Volvo Italia, in Rome, this September. The ease of deployment is probably questionable, but the whole thing can be folded into the trunk when charging is over. There are no knows plans to bring this prototype to market though. It would probably cost way too much, since it uses carbon fiber rods in its perimeter to be light and rigid, but it shows what technology can do.

Somehow, someone may try one day to make another portable solar charger and sell it. It would just need to be cheaper.