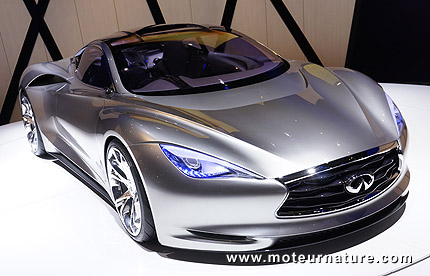 Infiniti is doing quite well in America, but it’s far from its sales objectives in Europe. The just introduced Q50 will help a lot, no doubt about that, but like many observers, Infiniti now believes it is in need of a halo car to highlight its brand name. The good news here is that it could be a plug-in hybrid. Just like the Emerg-E concept-car from last year (pictured), but better. The Emerg-E was certainly nice, but it was mostly built with Lotus parts, with a very small gas engine. Performance hence, was very poor when the battery was discharged. We hope Infiniti will know better for the production model.

The example to follow is the Chevrolet Volt, where performance is constant, battery charged or discharged, gas engine running or not. That would be very different from the McLaren P1 and the LaFerrari cars which are mild hybrids at best. Could Infiniti be the first to build a real electric supercar with extended range? We should get an answer by 18/24 months.