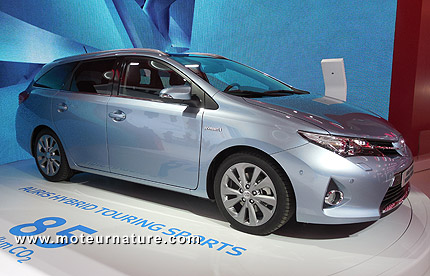 Toyota will soon launch a station-wagon version of its popular Auris compact. The Auris has been available as a hybrid for nearly 3 years, with exactly the same drivetrain as the Prius, and it regularly outsells its famous cousin. It will do so with a higher margin with the help of that new body style, but there’s also something new under the hood. The Toyota Auris hybrid Touring Sports (our picture shows it at the Geneva motor show) will have CO2 emissions of 85 gram per km, according to European testing methods, or a bit lower than expected thanks to very careful tuning and aerodynamic optimization. The same improvements will soon be brought to the standard hatchback Auris to lower its CO2 emissions as well.

The Auris Hybrid compact’s CO2 emissions will be brought down to 84 gram per km, and this is incredibly important. It’s highly strategic because Volkswagen is about to launch its Golf BlueMotion model, whose highly optimized diesel engine will put out 85 gram per km. The big idea is that the petrol-electric hybrid Toyota will be better than the diesel Volkswagen. It may not sound like much, but for hybrid fans in Europe, it’s a very big deal: Toyota’s hybrids will stay as the best when it comes to low emissions.