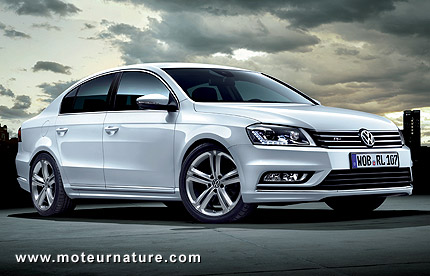 France today is a generous country for green car buyers. It gives buyers of an electric car a €7,000 incentive ($9,048), and €4,000 ($5,170) to those getting a hybrid (limited at 10% of the car’s price). It’s great, but it will not last. The system has been designed to be perfectly sustainable, as it should be self-financing but it’s not. This is a CO2-based bonus-malus system, where people buying a low emission car (or better a zero emission one) get a reward, while those buying a gas-guzzler must pay a hefty penalty. It was a nice idea, but the realization has been awful, and has totally changed the French automotive market.

Our illustration shows a V6 Volkswagen Passat (European version). Nobody would think of this car as a gas-guzzler in America, but it certainly is in the eyes of the French government. Buyers of a V6 Passat must pay a €6,000 penalty in France ($7,760). Very substantial money in troubled economic times like nowadays, and everybody’s getting the diesel four-cylinder model. The very high end of the market is still there, but the premium segment has nearly collapsed with the recession. The revenue to fund the EV incentives has sunk with it, and the bonus-malus system will have to be revised soon.

With the French economy officially in recession, and the government looking to reduce the deficit, there will no other choice but to reduce the incentives.