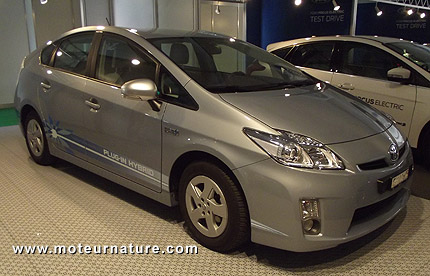 The plug-in Prius is already old story in the U.S. where it launched in February, but it’s only now arriving in Europe. Among much anticipation, the car came with a tough question to answer: who will be the first to get one? Toyota chose one of its leading customers, the Prince of Monaco. The Prince is probably the only person in the world to own not one, but 2 Lexus LS600h. One as his daily car, and another one which he had rebodied with an open top for his marriage last year. The Prince also owns a Lexus GS450h and several Toyota hybrids for his staff (Prius and Camry models).

Besides, Monaco is well-known (at least in Europe) for its commitment towards green cars and electric mobility. There 424 free charging points in Monte Carlo, and the country has the highest share of electric cars in Europe, and probably the world. The Prince launched last February a new 5,500 euros incentive ($6,930) for plug-in hybrids, and that should convince many more buyers. So it’s only normal he will be the first to get the technology he so strongly promotes.

Video below shows a plug-in Prius during a test last year in France.