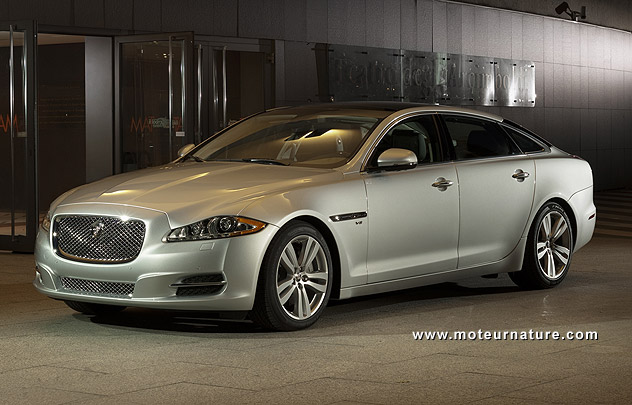 All drivers enjoy a big engine but few of them enjoy spending big money at the pump. We know hybrids and electrics, but there’s also downsizing, which is a fast-growing technology to get the feel of a large displacement engine with lower fuel consumption. After mainstream carmakers, Jaguar is going at it too. The normal engine for the XJ sedan is a naturally aspirated 5-liter V8, it will be axed in 2013, replaced with a 3-liter supercharged V6.

This new engine gives 340 hp of power and 332 lb-ft of torque, so it’s not far from the 385 hp and 380 lb-ft of the V8. Actually, it could be even better because of a flatter torque curve. Then, there’s a transmission change. The 6-speed automatic goes, and a 8-speed takes its place. Its ratios give a wider spread, and it comes standard with a Stop & Start system.

It sounds exciting, but there’s a pretty bad surprise: the Jaguar XJ with the supercharged V6 and 8-speed transmission is heavier than with the V8 and the 6-speed. Something wrong here, but the numbers don’t lie, and they give the advantage to the newer engine. Acceleration 0 to 62-mph goes down to 5.9 seconds from 6.4. Fuel economy gets better too, from 20 to 25 mpg on official European testing.

The 275 hp V6 diesel is even better. Its engine is unchanged, but it’s now hooked to the 8-speed, and that makes it even better. Its goes from 34 to 39 mpg. A fantastic value for a sedan this size. The top engine also gets the new 8-speed, that is the mighty 510 hp supercharged V8, its fuel economy gets a little better, from 19 to 20 mpg, we bet it will not be a big sales argument.

Nobody knows yet if the new supercharged V6 will be as enjoyable as the V8, but Jaguar’s engineers have a good reputation so we shall be confident. Besides, this V6 will be the main engine on Jaguar’s upcoming small sports car, so it has to be good!