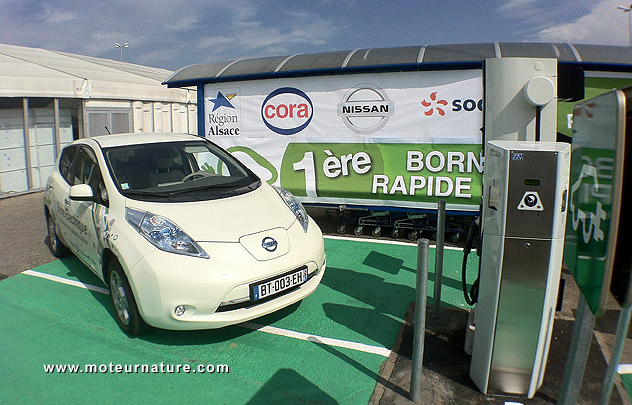 We learned of something incredible last year, something that had never happened before. To promote electric mobility in Europe, Nissan would give away 400 fast charging stations. That seemed huge at the time, but that immediately raised questions. Who will get the free chargers? There are more than 150,000 cities in Europe… Which ones will get lucky, and which one will be the first? Nissan carefully chose to avoid answering the second question, it put in service 2 fast chargers at the same time, in 2 different countries, France and the Netherlands. The French charger is in Haguenau, in North-East France, very close to the German border.

We see 2 reasons behind this choice. The first is that Haguenau is in Alsace, a French region which strongly supports electric mobility. It gives any buyer of an EV a 5,000 euros incentive. Then, there’s the location. Haguenau is 85 miles from Stuttgart. German electric car drivers will then be able to drive up to France.

The Nissan fast charger is inside the car park of a Cora supermarket, it can recharge a Leaf at 80% in 30 minutes. The charger is fitted with a Chademo connector, but it will also accept charging the upcoming Renault Zoe. A total of chargers like this one will be installed in France.