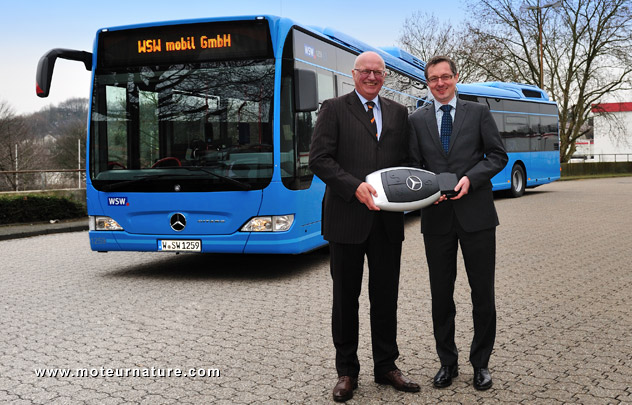 Let’s try to imagine the very best hybrid vehicle that could be built with today’s technology. The gas engine would not send its power to the wheels. It would be an electric vehicle, with the gas engine hooked to a generator. The engine would be a diesel for lower fuel consumption, and it would be precisely sized to be able to operate at a constant RPM, exactly where it’s the most efficient. On the propulsion side, the vehicle would avoid any transmission loss by using in-wheel motors. They would be fed by a lithium-ion battery which would allow some driving abilities in a pure EV mode, but no so much that the battery’s weight would become an issue. I’m happy to report that such a vehicle exists, but you can’t buy it: it costs more than a million and it wouldn’t fit in your garage.

This is a 59-ft long bus. A Mercedes Citaro G Bluetec clean diesel hybrid. Its engine is a 4.8-liter diesel, an amazingly small unit for a bus this size. The battery allows up to 10-km on electric power at low speed on a level. Acceleration is nearly silent from the four 80-kW motors, so pedestrians will have be cautious, and the driver even more. Though this bus is so big, everybody should see it. This hybrid bus has been put in daily use in the German city of Wuppertal. Let’s hope others towns adopt the technology all over Europe.