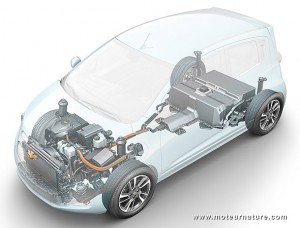 The Chevrolet Spark is one of the cheapest car on the European market. With a 1.0-liter 3-cylinder engine, you can get one for less than 8,000 euros (~$11,000) in France. It’s even cheaper in India where it’s sold as the Beat with (I believe) cheaper interior materials. General Motors has announced it will launch an electric version in 2013. That should be a much better car than the Mitsubishi i-MiEV.

The Chevrolet Spark has a roomier interior, and a more modern design inside and out. Another noteworthy info is that this electric Spark will get its battery from A123 Systems. We learned 2 months ago that GM would buy batteries from this American company, without knowing what it would be. So it’ll be the Spark and that may come with a highly unusual production organization, since the Spark is built in South Korea. Can you imagine an electric Korean car getting batteries made in the USA? Nobody would have thought that possible a few years ago. Actually, that may not happen, as Chevrolet may chose another plant to build these future electric Spark.

The car should not be available worldwide but South Korea, Europe and several American states are waiting for it, at a very affordable price that only a huge company like GM can bring. Several prototypes are already running, check one in the video below.