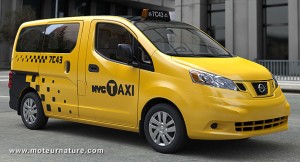 Not going to New York very often (!), I remember a trip 10 years ago when all taxis were Ford Crown Victoria. Things had changed last time I was there, and that was last year. I remember seeing a Prius, and a Ford Escape, an hybrid I suppose. Things will change again in 2013, as the New York City Taxi and Limousine Commission made a deal with Nissan which will supply taxicab built on the NV200 small van platform. I know that one! 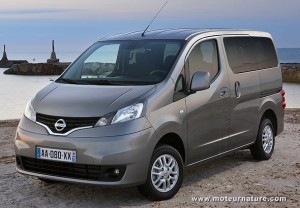 Nissan has launched it in Europe about 2 years ago as a van (with only 2 seats) and it’s about to sell it as a family model (with 3-rows of seats) in France (this family version is already available in Spain, where it’s built). Ford tried to get the NY taxi market (it’s 13,000 vehicles), but its Transit Connect is a 2002 design, and there was also a Turkish vehicle, from unknown and unproven manufacturer Karsan, the Nissan clearly was the best choice.

Europe has it with a 1.5-liter diesel and a 5-speed manual, New York will get it with a 2-liter gasoline and an automatic. Not as frugal, but still way better than an old Crown Vic. Of course, a Prius would have been even more efficient, but this Nissan isn’t in the same class. Taxicabs need a large trunk for those trips to the airport, and I estimate that the Nissan has 3 times the room of a Prius behind the front seats. There’s also more to come, much more I shall say: an electric powertrain.

Nissan said it several times, and a Nissan PR official told me last month that the electric NV200 will be the next Nissan’s EV. I just wonder if it will have enough range to please a taxi driver. That’s the great problem, as they never know if the next customer will want to go half a mile or 100-miles away…