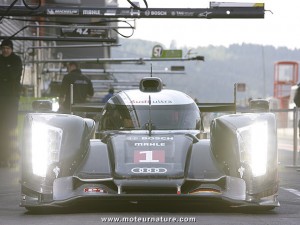 Since 2006, Audis racing at Le Mans had some LEDs lights alongside their xenon head beams. This year will be different, with the R18 race car having all LED front lights. This is a world first, and we shall expect this example to be followed by all the other teams, because LEDs are simply better. We already knew that LEDs had a lower energy consumption than light bulbs and that they were longer lasting, Audi adds that they weigh less than conventional lights, that they also give more light. Actually, the LEDs in the R18 are so bright they’re not road legal! 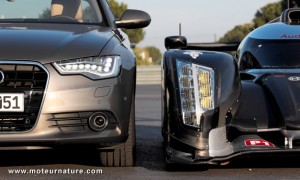 Their extra brightness won’t be a problem in racing, as there isn’t any incoming traffic, but Audi’s also a leader in bringing LED technology to the streets. The German brand was the first manufacturer to offer a full LED option on its R8 supercar. It didn’t come cheap, as they’re a 3,590 € option ($5,162), but price is coming down, they’re only 2,750 € on the A6 sedan ($3,954). I wonder if we will have full LED front lights without extra-charge someday, but if that happens, I’m confident Audi will be the first to propose them.