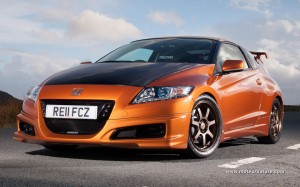 The Honda CR-Z is the closest thing you can get to a hot hybrid. I loved it instantly. It was one of the best car I test-drove last year. Yet, many people complained it was not hot enough (not me, though), and I know Honda is working on that. But the manufacturer is not alone. Mugen will get there first, taking a different road, much easier I guess. Mugen has chosen a supercharger to increase both power and torque quickly. Don’t know by how much yet, but pictures are official. 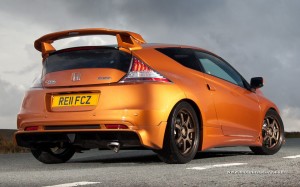 I guess we should expect 50% more power, and I know Mugen’s a champion when it comes to increase power levels, but I’m worrying about fuel economy. Honda is taking its time because it wants to deliver a hopped-up CR-Z without raising its low fuel consumption, but I don’t think Mugen had the same restraint. I know I wouldn’t accept 50% more power if that decreases fuel economy by more than… 10%. Actually, I’d say I don’t want to spend anything more than a stock CR-Z on gas. 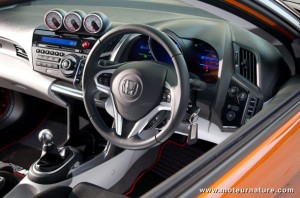 I’d rather spend my money on a larger battery, which I could plug, because that would reduce what I’m spending on gas. That is money well spent. Yet fuel efficiency is only one part of the equation here. People complaining about the CR-Z lack of power were not green car fans like me. Some may like the aggressive-looking body kit, whereas the suspension parts are sure to make the car handle better. If you think about the Mugen CR-Z as a true hardcore sports car, its fuel economy is irrelevant. But isn’t the CR-Z a green car first? It’s an hybrid!

This question about the Mugen’s CR-Z “reason for existence” will remain unanswered for now as we don’t know yet if this Mugen kit will be available. The car should be revealed at the British Goodwood festival of speed in July, we’ll find out what it will become by then.