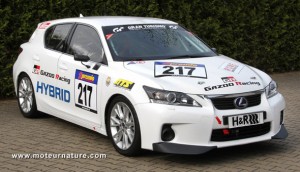 I’m not totally sure, but I think yesterday was the first time an hybrid Lexus went racing in Europe. It was at the mighty Nürburgring racetrack. The car was Lexus’ latest model, the CT200h. An hybrid, it’s the least powerful model in the Lexus range, but it got some extra power for the race. Its 1.8-liter gas engine had been replaced by a 2.4-liter from the H250h (an engine which is also used by the Camry hybrid).

The race was not the famous 24 Hour of the Nürburgring where a Lexus LFA prototype famously raced 2 years ago, it was a 6-hour event, part of the German VLN championship. A Lexus LFA was also racing, as where many very, very, fast cars, and the little hybrid car had no chance to shine.

The winner was a Ferrari F458, followed by a Porsche GT3 and a BMW M3 GT. The Lexus LFA arrived in the 9th position, and the CT200h was way behind… It came 108th. But that’s not bad. Out of 127 cars at the finish line, the little Lexus proved its reliability, and made very constant lap times. Considering the CT200h was in its maiden race, it’s quite satisfying.

What’s next? How about a street version with the 2.4-liter engine?