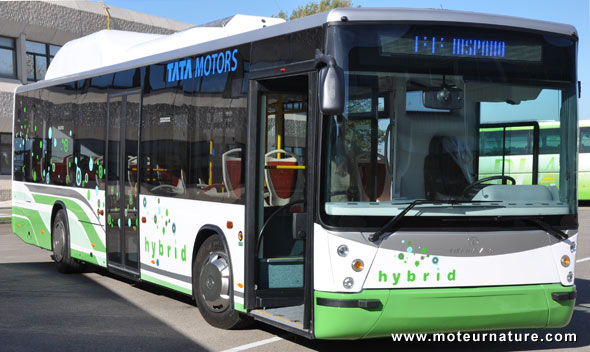 You’ve probably heard about Tata Motors, the manufacturer of the world’s cheapest car, the Nano. Since last year, this Indian group has become the owner of Jaguar and Land Rover, the 2 famous British brands. It was also last year that Tata Motors gained full control of Hispano Carrocera SA, a manufacturer of bus and coach cabins. This company has since been renamed Tata Hispano Motors Carrocera, and it got access to hybrid technology from its new owner.

How good is Indian hybrid technology? That’s the question many people are asking, and I don’t have an answer yet, but I welcome the news that a first European customer has been found. Tata Hispano Motors Carrocera has sold 10 hybrid buses to EMT Madrid, a Madrid city public transportation company.

With a series hybrid architecture, these buses are actually electric, but their batteries only give them a range of a few miles. There’s an internal combustion engine (ICE) working as a generator to charge the batteries on the run. The advantage is that this ICE runs at constant speed, precisely where it’s the most efficient, and it’s also very clean thanks to the choice of natural gas (CNG) as a fuel.

Designed for city use, these buses have a top speed of 44-mph, which sounds very low, but the manufacturer says accelerations are OK, and also very smooth. These buses will be built in 2011, and will in use in 2012.