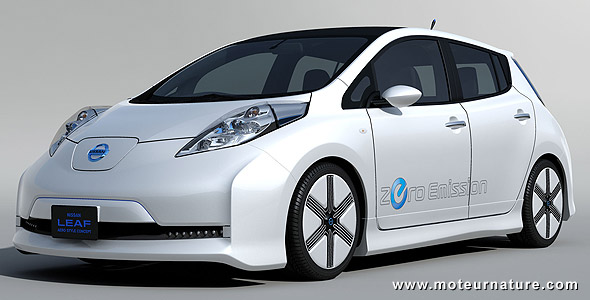 Some people just want more. Hot-rodders made their cars faster, and they painted flames on the hood. I guess it won’t be long before someone paints thunderstorms on his electric car.

This Nissan Leaf Aero Style Concept will stand proudly on Nissan’s stand at the upcoming Tokyo Auto Salon, next month. It’s not intended for production yet, but Japanese tuners are known for their aggressive styling. I’m pretty sure it could be made available quickly if there is a demand. Would you enjoy it?

I’m very much in favor of that body kit, because I was the first to complain when I discovered the Leaf, the world’s first mass-produced electric car. I had been waiting for that car for decades, but it was a huge disappointment to find out it was so undistinctive. That aero body kit makes the Nissan Leaf stand out, I like that.