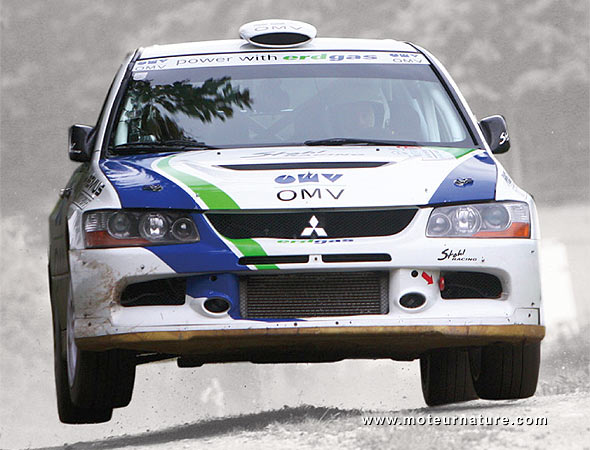 We are not very familiar with the idea of natural gas as a fuel. Most often, the only vehicles we see running on CNG (Compressed Natural Gas) are buses, or garbage trucks. The only natural gas car available to the American public is a Honda Civic, and that single model is not enough to change people’s feelings about CNG. This is where racing can help.

The Stohl Racing team has converted a Mitsubishi EVO IX, a race car, to CNG. EVOs are fast cars, with a very tricky turbocharging system, they are not easy cars to convert to CNG. But the Austrian team did it beautifully, and the resulting EVO is as fast as a gasoline car. But it’s not dual-fuel, it’s a monovalent car with the fuel tank removed. It runs on CNG and nothing else.

Competing in Austria, it participated in the Schneebergland Rallye, which is a not a WRC (World Rally Championship) race, but still an important race in the Austrian national championship, and it came second. Only two-tenths of a second behind the winner! It could have won, leaving all the gasoline cars behind. Austrian engineers will be proud, but maybe more important, we shall congratulate the Austrians for their openness. You just can’t race a car running on CNG in the US.