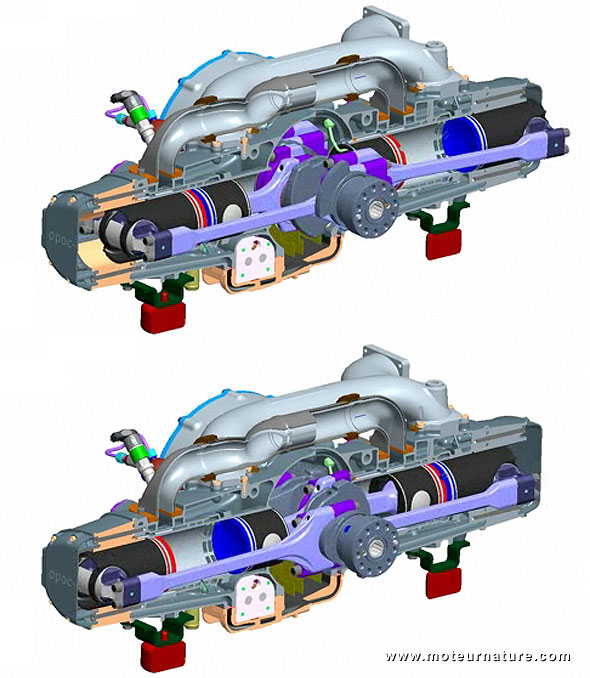 OPOC stands for Opposed Piston Opposed Cylinder. That sounds original, but it’s hardly new. The idea is more than 100 years old. It’s not the same architecture as in a flat-6 from Porsche, it’s more like having 2 pistons in one single cylinder. The pistons are not side by side like in a normal engine, but back to back, always moving together. When one piston is at Top Dead Center, the other is at Bottom Dead Center, and vice-versa. It’s a 2-stroke engine, and it’s compression-ignited.

It’s running real fine, on condition it’s at a fixed low RPM. Like 300-RPM, as engineers found out 100-years ago.

The problems arise when you want to rev, or when you want this engine to get the power band an average automobile requires. Prof. Peter Hofbauer said he overcame all these difficulties. Few people would believe him, if he weren’t one of the best motorists of Volkswagen, before he created EcoMotors to promote this particular engine design.

The strong points of the OPOC engine are its compactness, its simplicity as there are less engine parts than in a conventional engine, and its efficiency. EcoMotors doesn’t give any data, but the best diesels have around 40% efficiency, and the OPOC engine could have a bit more. I guess Bill Gates had more information. With Vinod Khosla, another high-profile investor, they made a check of $23.5 million so that the company could finalize its engine, and install it into a car to make real-life tests.

Still, there’s a long way to go before a car manufacturer will offer this engine in a production model. One worry could be toxic emissions, as 2-stroke diesel are notoriously awful.

One thought on “Bill Gates invests in the OPOC engine”