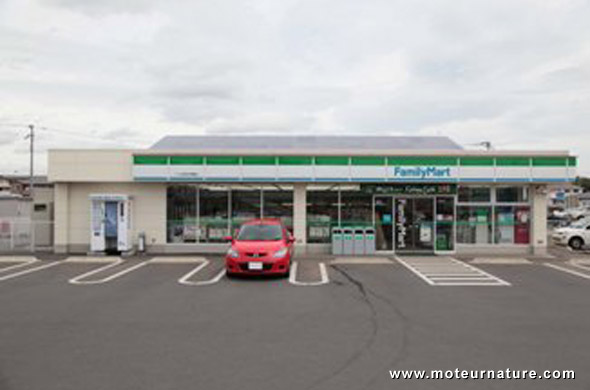 A convenience store like there’s thousands, with photovoltaic cells on the roof. With something strange, these solar cells do not make electricity for the shop below. The electricity is not used on the spot, nor is it sent to the network, it is being stocked in lithium batteries. That electricity will be used later, to recharge electric cars.

The cars are Mazda 2, converted to electric propulsion for this test, with the drivetrain coming from Think, the scandinavian manufacturer. That is very unusual, since the japanese are quite chauvinistic people. Actually, it would have been easier to launch the project with cars coming straight from Think, but to its backers, it would have been disturbing to launch such an innovative project in Japan with foreign cars.

So Mazda 2 were chosen, with Think quickly called in, to provide and install electric drivetrains. Batteries are coming from Enerdel, the american manufacturer that is one of Think most important financial backers, to make the project fully international: a japanese car with an european drivetrain running on american batteries.

This is car sharing, or very short term car rental, restricted to the people who have signed up to the service, with cars booked via the Internet. The video below explains how it works. That’s in japanese, but the images are quite explicit. They show the standardization of batteries.


The idea is that when the batteries are new, the cars get them first. Then, after 500 or 1,000 cycles, when they have lost some of their initial performance, they will be used at the charging station, where that matters less.

The Itochu group, a large japanese conglomerate from Tsukuba City, is the project leader, for this test that will run for 3-years. Questions of cost will come after that, but we can already predict that with solar electricity, and local electricity storage, this is going to be a hugely expensive project…