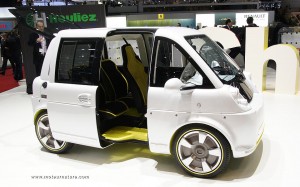 Being optimist is a difficult challenge when you look at Heuliez. The french company used to be a successful contract manufacturer, but it hasn’t built any car since last summer. The company should have gone bust already, if it weren’t for strong local political activism to keep it afloat. The company fell into the hands of Louis Petiet last year, he made the promise to refinance it with his own money, but he failed to bring the millions he promised. Last month, great hope came with Alphan Manas, a turkish businessman, but his proposal doesn’t make much sense, as he only offered to take over 15% of the company, but with full access to its knowledge and patents. So Heuliez is looking again for new investors, and there is not much time left as debt is mounting. 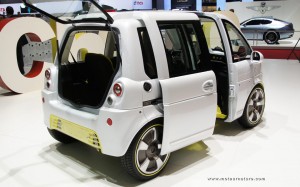 The company might have a future with electric cars, and that is the Mia (these pictures were taken during the Geneva motorshow last month), a small 3-seater city runabout, that was originally shown with the name of Friendly. Heuliez needs a few millions euros to complete its development, and the car shall be sold via the Internet, as Heuliez doesn’t have any dealer yet. Heuliez says it has several thousands requests for the car. Requests made online, these are much different from firm orders made with a deposit at a dealership. The Friendly shall be sold for 17,500 euros ($23,500), and what you’ll get would be a zero-emission car with a top speed of 65 mph, with lead-acid batteries, giving a range between 45 and 60 miles, depending on your driving.

This may sound exciting today, as electric cars are so rare, but this is not going to last. Reva and Tata, 2 indian companies have already announced that they will shortly sell electric models with competing specifications in Europe. Both indian companies will benefit from workers at a much lower cost than in France, with advantages in scale. So, anyway you look at it, the business case of Heuliez is difficult. According to AFP, 3 private investors are looking at it, official proposals shall be made next week. If a deal cannot be agreed upon, Heuliez will close its doors before the end of the month.

Would you bet on Heuliez? I wouldn’t.