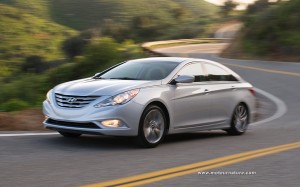 It was quite a shock to learn that the Sonata, Hyundai’s family sedan, would not be available with a 6-cylinder in this new generation. This is the CO2 effect. Manufacturers all over the world are working hard to make cars more fuel efficient, and large displacement engines are disappearing at an alarming rate. To replace them, small turbocharged engines. Base engine in the Sonata is a 2.4-liter inline-four with 198-hp, with the high performance option being an engine of smaller displacement, only 2 liters. With turbocharging. 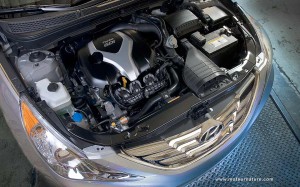 A 2.0 liter. Engines of that size are more and more common, they’re also more and more powerful. The Volkswagen Golf has a very potent 200-hp turbocharged 2.0-liter, which gives it sports-car performance. And talking of sports car, the late Pontiac Solstice roadster had a 260-hp 2.0-liter engine. But Hyundai’s doing it better, their new turbocharged 2-liter makes 274 horsepower. That’s 137 hp per liter! This was race engine level barely a few years ago. But with today’s technology, super-sophisticated engine controls, it’s possible tu run such an engine in a mainstream family sedan.

Some questions remain though. Will this engine be as reliable as a 3.5-litre 6-cylinder? And what will be its fuel economy in the real world? How much better compared to a Camry with a V6? The official data is 22/34 MPG (City/Hwy, preliminary estimates) for the Sonata Turbo, versus 19/29 MPG for the Camry V6 (268-hp).