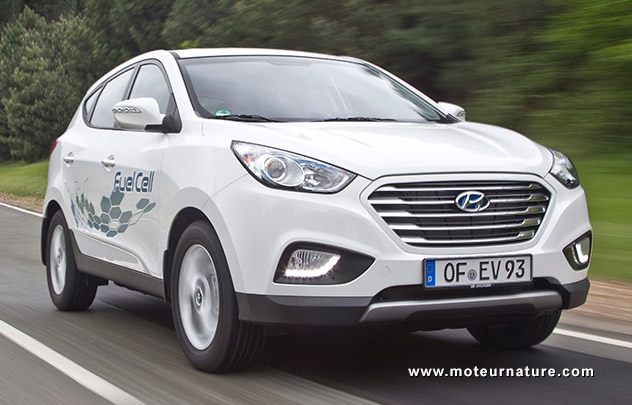 Some people still wonder about the usefulness of fuel cell cars with battery electric cars getting better and better, but this journey will show them how superior a car like this Hyundai ix35 Fuel Cell (sold as the Tucson in America) can be. Two Norwegians, Marius Bornstein and Arnt G. Hartvig, from Oslo, drove up to Malmo, in Sweden, via Gothenburg and Copenhagen. 435 miles. With some city driving, the trip took them ten hours. They drove at an average speed of 47 mph, all that without any refill along the way.

No battery electric car could have achieve that. Not even a Tesla Model S. 435 miles, and the trip computer indicated the car had enough hydrogen to drive a further six miles. That’s 441 miles of range. Highly exciting, and the best part is in the 3-minutes refilling time. Other demonstrations with fuel cells cars will follow all over Europe, at least where there’s a hydrogen station nearby, like in Malmo. 110 fuel cell cars (75 Hyundai) are already scheduled to arrive in Europe in the coming months.