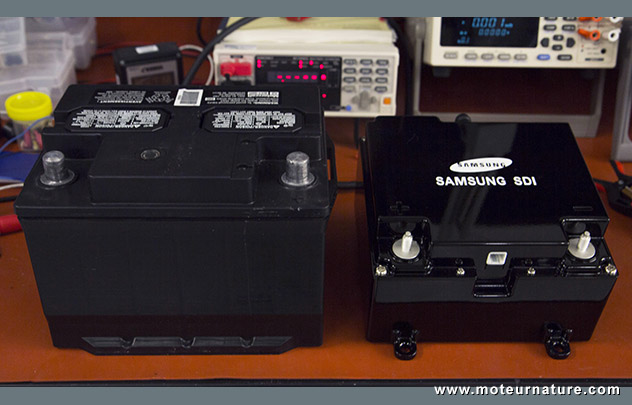 Everybody knows that lithium-ion batteries are better than lead-acid ones. The best proof is that lithium cells are everywhere these days, in phones, laptop computers or cameras. Their only issue compared to lead is their much higher price. In a car that requires to store a large quantity of energy at a sensible price, the old tech is still leading. The only production gas car fitted with a lithium battery today is the Porsche 911 GT3. A great car, no doubt about it, if you can afford it.

Ford had another idea when it launched a R&D partnership with Samsung SDI. If lithium cells alone are too expensive for high volume cars, let’s cut the problem in two. How about a dual solution, with two batteries, one lead-acid, the other lithium-ion?

It sounds a bit strange, but the price increase is modest and it works. Better than expected actually, because lithium cells can charge/discharge faster than lead ones. When associated with a smart alternator, which recovers lost energy during braking phases, and a Stop&Start system, which prevents the engine from idling while the car is at a stoplight, those two systems can perform better than with lead acid cells. The lithium cells maximize their potentials, for lower fuel consumption.

Longer term, Ford and Samsung are working on new lithium batteries to replace existing lead ones, but in the meantime, dual batteries are highly possible, for lower weight and slightly reduced better fuel economy.