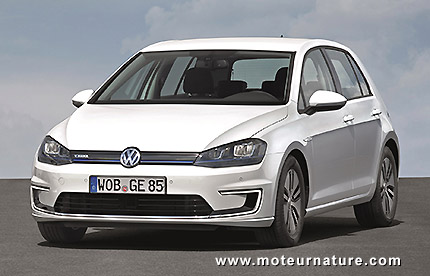 The news hasn’t been confirmed by Volkswagen yet, but German automotive trade magazine Automobil Woche has announced that the plug-in hybrid version of the Golf shall carry the GTE moniker. There’s no doubt that it sounds better than the Twin Drive name VW previously used, but it’s also highly symbolic. Every driver in Europe knows the GTI and GTD names, and by calling the plug-in hybrid version GTE, Volkswagen is trying to raise the fame of its new model to the same level as the world’s famous GTI. Older folks may remember that Opel used the GTE name on its Kadett and Manta. The E stood for Einspritzung (injection) by then, it will now mean Electric. GTE would not mean original though. The plug-in hybrid Golf will have the same powertrain as the Audi A3 e-tron. Besides styling, the only difference will be the price.

If we look at the most upmarket versions of those two cars, there’s about €1,500 between the Audi S3 and the Volkswagen Golf R. It’s safe to expect a similar difference between the Audi A3 e-tron and the VW Golf GTE. Next to that, Volkswagen will have a great opportunity this year, with the Golf turning 40. It would be nice to launch the plug-in hybrid version on the Golf’s birth date.