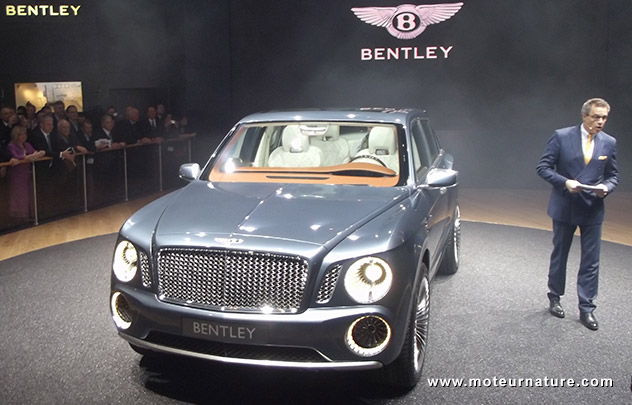 When presenting its excellent sales figures for the past year, Bentley acknowledged it will launch its first SUV in 2016. The concept unveiled in 2012 (our picture) wasn’t exactly successful, but the production version will be much better designed, and should be attractive to all, as a Bentley should. There is proven demand for high end SUVs and Bentley’s decision to make a super luxury SUV was much expected, but there will be a surprise in the form of a hybrid version. And it’s very likely to be a plug-in!

This will be the first hybrid Bentley, and it would be a great achievement if it’s a plug-in, but it’s also a huge technical challenge. That, because the plug-in hybrid system from the Porsche Panamera, or the upcoming Audi A3 e-tron would not work. A different architecture is needed to provide the thrilling driving experience a true Bentley shall provide. The very wrong thing in the Porsche Panamera S E-Hybrid (or the BMW i8), is that those models have reduced power when in electric mode. The Chevrolet Volt is much better. It drives exactly the same withe battery fully charged or discharged, and this is what a Bentley hybrid should deliver.

The idea of a reduced power mode in a Bentley is absolutely shocking. Considering the price and the luxury, a Bentley should provide huge power at all times. Even when the driver doesn’t need it, because nothing in a Bentley should be moderated. In the most expensive Continental, the driver has more than 600 hp under his right foot, and they’re always there. No need to activate any sport mode. A 400-kW motor with a 300-hp V6 gas engine could provide the sort of exhilarating power Bentley are known for. It would be more expensive and heavier than a simpler set-up, but weight and cost have never been issues for the prestigious British brand. Will they do it?