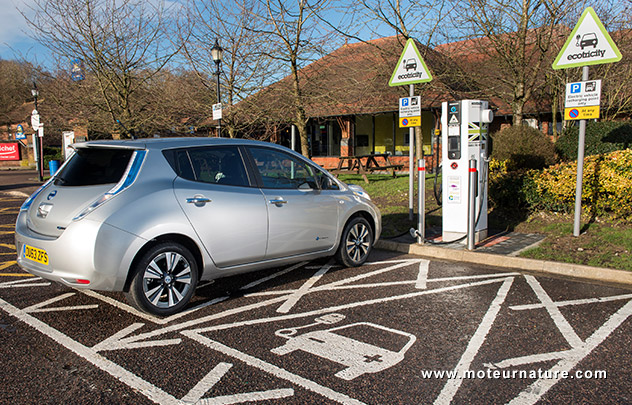 Who is the largest installer of high speed chargers for electric cars in Europe? The answer isn’t a utility company, but a car manufacturer: Nissan. The Japanese company had its 1000th charger installed this week, in England. Some people in Europe were expecting governments to launch charging networks, and most are talking about it, but it is private companies which are acting, and none more so than Nissan. 1,000 fast chargers!

This 1000th charger is part of the Ecotricity network, and Nissan has been truly nice, because it didn’t choose chargers only its cars could plug to. Nissan installs AC/DC chargers, with one 50kW Chademo plug (the Japanese standard), and a 43kW AC Type 2 connector which the Renault Zoe can use. It sounds logical since Renault and Nissan have formed an alliance some fifteen years ago, but that wasn’t a given. So next to the people driving a Nissan Leaf, those behind the wheel of a Renault Zoe are also thankful to Nissan. Last thing, we note that most of those chargers are French-built, from DBT. The Leaf is the best-selling electric car in Europe (and in the whole world as well), and DBT is probably the leader in high speed chargers in Europe.