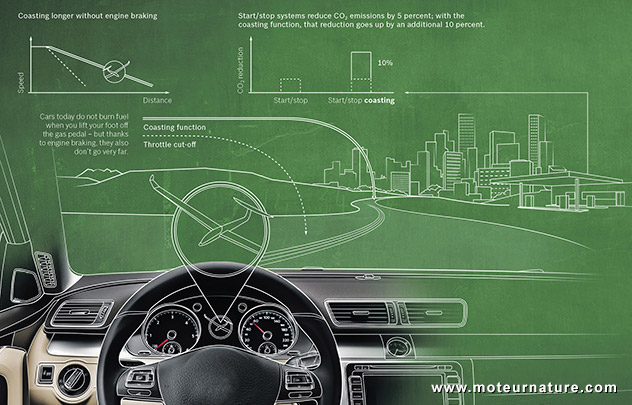 Hybrids are really incredible. They have to be experienced: their gas engine is switched off so often! Stop & Start systems are much less impressive. They only manage to turn off their engine when the car is at a full stop. It would be better if they could turn it off as soon as the driver takes his foot off the gas pedal, but that’s not possible with a conventional transmission. The dual-clutch semi-automatic transmission has changed all that. Bosch has found out how to take advantage of it, to make the first Stop& Start system fully effective during coasting. That’s freewheeling, and it works. A driver takes his foot off the gas pedal at 50 mph, and the engine shuts off, only to restart when he accelerates again.

It’s much more effective than a fuel cut-off system like all cars have nowadays. The engine is totally off, without any fuel injected to prevent it from stalling, and it’s no longer in gear, so there’s no engine brake. The car is free-wheeling. It’s coasting mode. Depending on driving conditions, Bosch says a fuel economy gain of up to 10% is possible, and the auto supplier is bullish about the upcoming success of its new system. Hey, who’s against better fuel economy? Every new car with a dual clutch transmission should get this new better performing Stop & Start system.