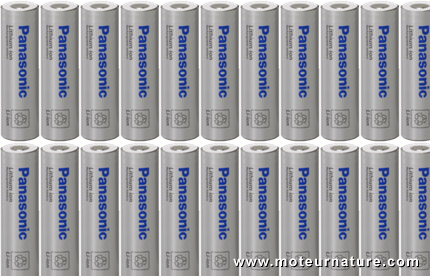 Panasonic has been supplying cells to Tesla Motors for many years, but there was a bit of a suspense a few weeks ago, when Tesla Motors said it was in touch with other suppliers. Koreans: LG Chem and Samsung. The suspense is now over, and there isn’t any surprise. Tesla Motors has renewed its agreement with Panasonic up to 2017. Considering Panasonic is an important shareholder of Tesla, it’s only logical. If there is a surprise, it’s in the size of the agreement. The Japanese company will supply no less than two billions cells to Tesla!

Some precision is needed here, since it is actually Tesla which builds its battery packs. Panasonic supplies the cells, and there are about 7,000 of them in a Model S with the largest battery (which is the most successful). Two billions cells over four years make a theoretical 71,428 cars each year, but we know Tesla will only make 21,000 cars in 2013. It’s doubtful it can do more than doubling its production next year, so the plan should be to make 100,000 cars in 2017. Or maybe a bit less as Tesla is thought to be working on a Model S with an increased range, maybe with 7,500 or 8,000 cells.

Anyway, this is highly impressive for both companies. Tesla will grow to be a volume leader besides the technology leader it already is, while Panasonic, which also supplies batteries to Toyota for its hybrids, will be the leading automotive cell manufacturer in the world.