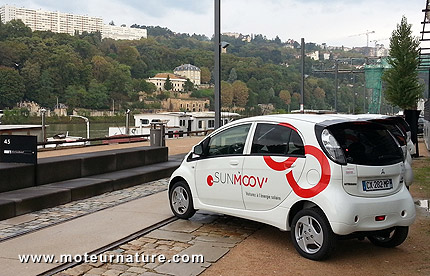 This is an ambitious project which has started in Lyon. A whole new green neighborhood, Confluence, with positive energy buildings (which make more energy than they need) and electric cars to be shared between the inhabitants. It’s a French-Japanese smart community project which got started with a partnership between Le Grand Lyon (the administrative jurisdiction which governs Lyon and its suburb) and NEDO, the Japanese semi-governmental organization which promotes the development and introduction of new energy technologies. French companies are making the buildings, but all the high tech is from Japan.

Toshiba is building the smart grid infrastructure with solar stations to get renewable energy, while Mitsubishi will supply the cars. There will be used by a car sharing service called SUNMOOV’ which shall count 30 cars. Mitsubishi will supply 15 of them, the rest shall come from Peugeot and Citroen, but they will be Mitsubishi clones, as the two French brands have been selling them for three years.