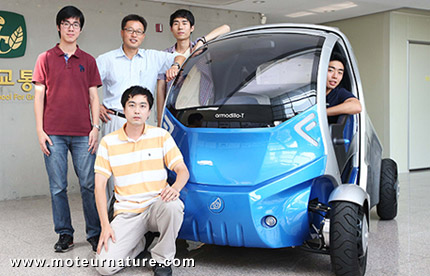 It will be hard to understand for many American people, but in many countries, cities are crowded. In Seoul, population density is five times greater than in Los Angeles, so parking space is scarce, and that lead to the idea of folding cars when parked. This concept has been built by students at a Korean university (KAIST), and it carries a Spanish name: Armadillo-T, because its body can fold, a bit like the animal from Texas. It really does: from its normal length of 9.18 feet, it’s shrinking down to 5.41 feet when folded.

The Armadillo-T has four in-wheel motors and a lithium ion battery fitted in the front part of its underfloor, so there’s very little weight in the back, making it easy to lift. Two small support wheels act as stabilizers, and then the rear wheels move up, but the thing looks much ungraceful with those two wheels up. Folding cars will have to get better if they want to be successful.

One thought on “The Armadillo-T, an electric folding car from South Korea”