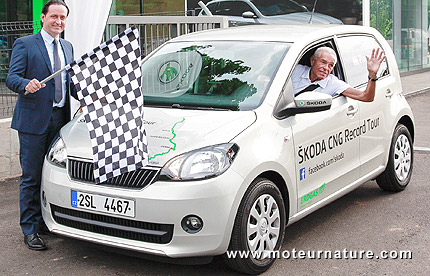 We are not yet familiar with the idea of cars running on compressed natural gas (CNG). That’s the same fuel we have in the kitchen, but it can also power cars as this road trip shows. CNG is cleaner to burn than petrol or diesel, it’s plentiful but it’s main appeal to Europeans lies in its low price. Skoda, the Czech manufacturer known for its cars’ value, has hired Gerhard Plattner to prove that point. An Austrian auto journalist, Gerhard Plattner is a respected hypermiler, who holds many records for achieving astounding fuel economy figures. 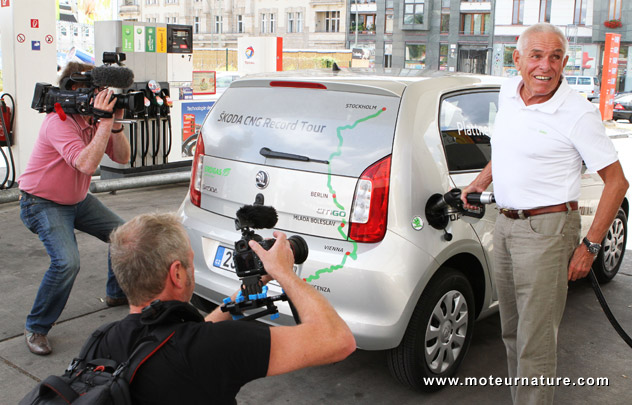 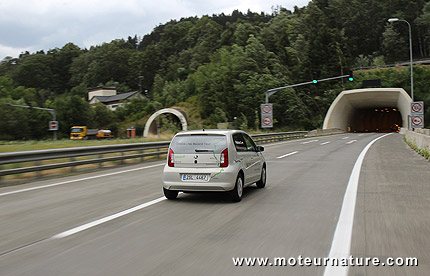 For this record, Skoda handed him the keys of its smallest model, a Citigo. A CNG-powered Citigo Green tec. That city car also has a small gasoline tank, but it was sealed, so that the trip would have to be entirely on CNG. The plan was to go from Vicenza, in Northern Italy, up to Stockholm, in Sweden. Gerhard Plattner drove through Austria and Germany, not choosing the shortest way to attend photo sessions in Vienna and Berlin, driving a total of 2619 km (1627 miles). Driving quietly, he was nearly five days on the road.

When he arrived, his total fuel consumption was 138 lbs of CNG, which costed him €81.24 ($107.71). To anyone living in Europe where gas costs $7/8 a gallon, so little money to drive such a distance is absolutely incredible. Then it was green driving. Running on CNG, the little Skoda had lower CO2 and toxic emissions than if it had been running on gasoline. CNG isn’t available in all of Europe, but the distribution network is growing, just like the numbers of cars on the road. It’s a safe bet that with this Skoda Citigo record drive, enthusiasm towards cars running on CNG will only grow faster.