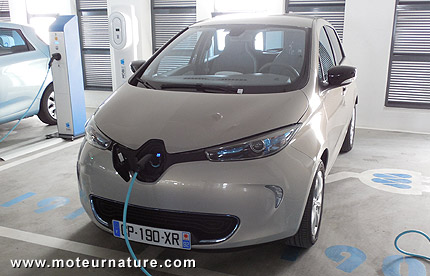 Many people are expecting this figure. The first full month of sales for the electric Renault Zoe in France. Actually, the Zoe had its commercial launch in March, but registrations for that month were highly distorted due to hundreds of cars registered by dealers for demonstration purposes. April was the first month with real sales, with cars being bought and driven away by individual customers. There were 748 Zoe sales in France during April. Some comparisons are then needed, for those not familiar with the French market.

There were 157,859 new passenger cars registered in France during April. Cars selling a bit more than the Zoe were the Peugeot Partner (806 sales), the Volkswagen Up (793) or the Opel Astra (784). Models less successful than the Renault Zoe were the Citroen C4 Aircross (652), the Skoda Fabia (630) or the Kia Cee’d (628). Note that both the C4 Aircross and the Cee’d are both very recent, and that the best-selling car of the month was the Renault Clio IV, which found 9,678 customers. That makes it 12 times more successful than the Renault Zoe, and 10 times more than the electric car market (all models included), which represented 940 cars last month in France.

The Zoe is leading with a huge margin, Renault should be proud of that. The Zoe should also keep on leading, asthere are still many people waiting to get their car, but the electric car remains a niche market in France (and in Europe). Nobody should expect this to change soon.

2 thoughts on “The electric Renault Zoe starts with modest sales”