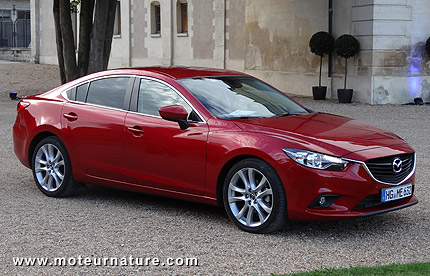 This generation of the Mazda 6 has been on the market for less than a year, and it has been collecting prizes and awards right from its first introduction. Only a few weeks ago, it got the Red Dot Award for its design. It also won the innovation prize from the Swiss Association Transports et Environnement for its use of several energy-saving technologies, labeled as SkyActiv by Mazda. But the biggest prize came from ADAC, the giant German automobile club.

The ADAC tests nearly every car sold in Germany, and it invented its own method, the Eco-Test, for measuring fuel consumption. This data is much appreciated in Germany, with many people estimating that the ADAC’s Eco-Test gives more accurate figures than official fuel economy data. ADAC tested the Mazda 6 with the base engine, a 145-hp 2-liter gasoline four-cylinder, and it got the best figures it ever had for a non diesel, non hybrid sedan of this size. 5.67 liter per 100 km or about 41 mpg! No other family sedan does so much with so little fuel.