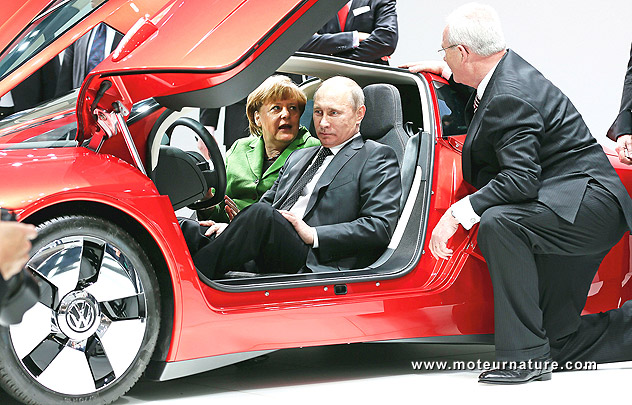 Russian president Vladimir Putin was at the Hannover Fair this morning. German chancellor Angela Merkel greeted him and took him to the Volkswagen stand where he had the opportunity to sit in the world’s most fuel-efficient car: the Volkswagen XL1. This is the only production car in the world that can get 200 mpg in normal driving.

The two leaders talked about Volkswagen’s investments in Russia, most notably the new engine factory in Kaluga, but the Russian president was more interested in the German educational model, where young apprentices learn at factories. A few young Russians have already began doing that in Kaluga, following the German model of vocational training. Dr. Horst Neumann, Volkswagen’s Board Member for Human Resources, added that: “Volkswagen already trains three quarters of its 16,500 apprentices throughout the world on the basis of the German dual vocational training model. Together with the Golf, the Audi A4 and the Porsche 911, this training model is one of our Group’s export bestsellers.”