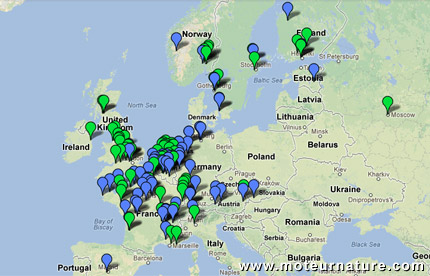 Many people are waiting for the electric car to be successful in the market place, and they are also waiting for a network of fast charging stations. It’s the classic chicken and egg problem. The first part of the equation is nearly resolved, as there is now a handful of electric cars on the market. And here’s the answer for the second part, with the launch of DBT’s fast charging network. DBT is a leading French charging stations manufacturer, its Universal Quick Charger network now counts 300 fast chargers all over Europe, from Spain to Russia.

There are some chargers on highway services areas in Italy and in the UK, in supermarket car parks in Belgium, in hotel chains in the Netherlands, and in various places in France. This network may be the cornerstone where the electric car will build its success.

My own experiences now, as I’ve used fast charging on two occasions recently. During my test drive of the Renault Zoe, when I stopped for lunch, I parked and plugged at a fast charger, getting the car’s battery from 40% to 99% while I was getting my meal. I did exactly the same thing when testing the updated Nissan Leaf, with the battery going from 26% to 89% while I ate. There’s no doubt slow charging is adequate at home, during the night, but all public chargers should be fast units.