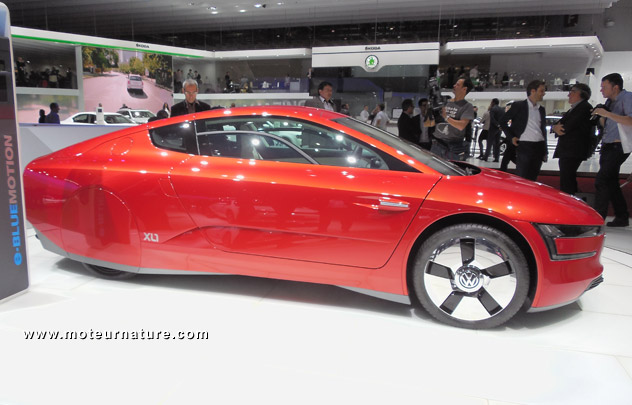 Some cars are better than the others, and this one is simply better than all the others. Nothing can beat it on fuel economy, this is the most fuel efficient car on the planet. I’ve already written about it here, but I want to add three things. The first is that this XL1 is a real production automobile. Volkswagen has already built 50 of them, and they’ve green-lighted a first batch of 250 cars. So it’s still low volume, but this is regular production. My second idea is that the XL1 is so good that it could kill the electric car. Why wait for an EV that needs hours to charge when CO2 emissions are so low, and operating cost so minimal in this XL1 diesel plug-in hybrid?

Volkswagen should also consider dropping the plug-in hybrid drivetrain, and making a sports car out of this incredible platform. Just imagine the XL1 with the 3-cylinder from the up! with a turbocharger added. With a 15 gallons fuel tank, the result would be a car with a 150 mph top speed and a range of much more than 1,000 miles. It would the perfect car for long trips on the autobahn.

Finally, Volkswagen has released this video which shows the XL1 in traffic. There’s really nothing like it on the road! The world has never seen something as futuristic, and Volkswagen shall be really proud of it.