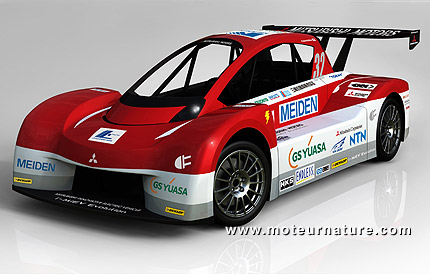 We were enthusiastic when we learned that Mitsubihi was bringing an electric car to the Pikes Peak rally, but in the same time, we were highly pessimistic for that little car in the race. There are some super powerful cars at that rally. Racecars with large turbocharged V8s, with more than 10 times the power of the little Mitsubishi. Sure, promoting the electric car with racing is nice, but finishing last won’t do it. The Japanese company had every reason to be afraid of that, and it acted accordingly.

The Mitsubishi i Evolution, which will compete in the rally, has hardly anything to do with the production model, which is more of a citycar. The much different look was expected, but there’s also much more power, and that is a surprise. The Mitsubishi i Evolution will use the same motor as the production model, but with power upped to 80 kW, and it will have 3 of them. One for each rear wheel, and a third one for the front wheels. This Mitsubishi has now more power than a Tesla roadster.

It should not finish last, and could make an attractive sports car proposition. How about building a few of them, and making them available to the public?