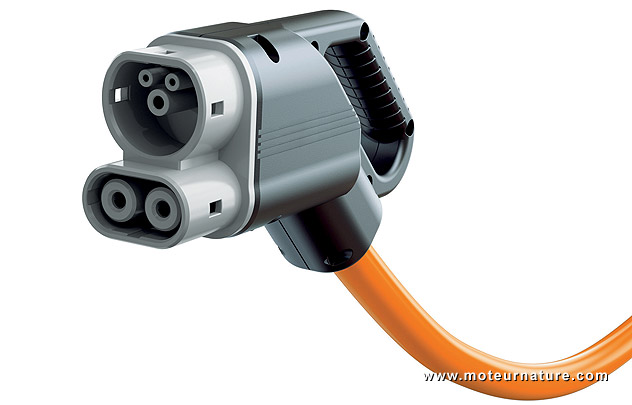 I had thought that the difficult problem of finding a single, common plug to charge all electric cars around the world was over, but I was wrong. At the Geneva motor show, both Mercedes and Renault electrics were using the same connector, the one known by specialists as the “Type 2”, or to the general public as the “Mennekes” connector (from the company which pioneered it), but it might be another plug that could finally prevail.

4 car manufacturers, Chrysler, Ford, General Motors and Volkswagen, made public an identical press release yesterday where they explain their support for a new standardized plug with the picture above. We’ve already seen that connector with the name of “Combo 2”. Besides the already mentioned companies, the press releases also say that BMW, Daimler and other brands of the Volkswagen group are supporting it. Both the European ACEA (the official European car manufacturers lobby) and the American SAE should also support the new plug, making it the most widely supported connector in the world.

A versatile plug, this connector can deliver anything from the standard domestic current (110V in the US, 230V in Europe) up to a super strong 100 kW DC current that could charge an average electric car in about 15 minutes. The new plug will be on display at the upcoming EVS26 show in Los Angeles, next week.